It’s getting chilly. The nights are drawing in! And after a fantastic hot summer, it’s time to relish the cold and dark nights of the next season. Part of the magic of this time of year is feasting on old British classics such as Toad in the Hole, Lamb Hotpot, Chicken Tikka Masala and of course, pie!

The humble pie has graced many a table, as has the puckish pint. It’s a match made in heaven. It’s an autumnal feast! It’s what we need to start filling those tummies before winter sets in. Pies are generally filled with Autumns harvest. Rich flavoursome foods like root vegetables, potatoes and game meats are all commonly found in pies. There’s something about autumn that calls for warming up and indulging in a hearty pie.

Savoury pies are popular in the UK, we eat over £1 billion worth a year![1]

Promises and pie crusts are meant to be broken
Jonathan Swift

The Life of Pie

There is evidence of pie-like dishes dating back to the invention of dough. It is believed that the first historical evidence of pie-making goes all the way back to the Ancient Egyptians; revered as the first agricultural practitioners who grew cereal crops such as wheat, barley and flax.

It is the Ancient Greeks, though, that are believed to have invented pie pastry. The pastry was similar to filo pastry; a flaxy crunchy unleavened dough. Pies were part of everyday life in Ancient Greece and the pies would be filled with foods like fruit and honey[2].

The Romans, throughout their various conquests, brought the art of pie-making to Northern Europe[3]. Olive oil was the fat used in Greek and Roman pies, but as the popularity of the dish travelled North, butter or lard was used. The use of the solid fats made the pastry malleable. It was a pastry that could be rolled and moulded. Thus, the pie we know was born!

Pies were seen as a staple food for those who lived in colder climates and for those who travelled. Pies, or ‘pyes’ as they were known, were mostly meat-filled in the cooler parts of Europe. Pies were generally baked in earthenware pots. These weren’t particularly travel-friendly. The solution was to create a crust.

Pie progressed in popularity in the Medieval times and was an accessible food to the rich and poor alike. Pies were a food that could be easily cooked over an open fire. Generally, the pie’s filling was the main event, and the pastry was there more to contain the filling during cooking rather than to be eaten. Pie fillings were made to nutrient-dense, a meal-in-one, much like the Cornish pasty today.

Why, there they are both, baked in that pie;
Whereof their mother daintily hath fed,
Eating the flesh that she herself hath bred.
‘Tis true, ’tis true; witness my knife’s sharp point.
Titus Andronicus

A Pie is A Pint’s Best Friend

To celebrate British Food Fortnight, here on the foodful blog is a selection of our favourite local pies matched with local beers from around Northumberland and the Scottish Borders.

The classic, and most popular, pie of them all! The steak pie is perfectly complemented which rich, full-bodied ales such as stouts and porters. It is also common for these ales to be added to the gravy.

Cheviot Brewery’s stout, Menhir 5.1% ABV, a stout with notes of roast malt, dark chocolate, burnt caramel and hints of coffee, brings out the richness of beef in all its glory.

Their stout Menhir is used at their local pub, The Black Bull in Etal.

There are several reasons that Menhir ale works well with our steak and ale pie. The main reason is that it adds a deep and velvety flavour which can be tasted through the steak as the meat is cooked in your ale alone for the first hour allowing the meat to take on the flavour. It also compliments the sweet veg in the pie the ale pulls the sweetness back from the veg and giving it a complimenting flavour which works well with the meat. There have been so many compliments on the steak and ale pie whilst using Menhir ale. This is all down to the ale that the meat is cooked in. Has to be the best that I have used over the years.
Carl, Chef at The Black Bull, Etal

Another local variation of Steak and Ale Pie in the southern part of Northumberland is by Jill’s Catering in Catton, a village not far from Hexham and Allendale Brewery.

Jill used to deliver pies to Allendale Brewery and was asked to try one of their ales in a steak and ale pie. The pie has received many wonderful comments and just shows how local businesses can help each other. The pie was even advertised in the local butcher shop. Now Jill has her own cafe and offers an outside catering service.

The ale in Jill’s Steak and Ale pie is Wolf, 5.5% ABV. Wolf ale is deep red and full-bodied. The rich and complex malts provide depth and it is complemented by a berry aroma.

The Scotch Pie is a national icon in Scotland. A Scotch pie can also be called a mutton pie and can be found in nearly every butchers and baker shop around Scotland and Northumberland.

Try Rigg & Furrow’s latest beer, Landbier, an unfiltered country lager. The lager is inspired by a trip to Bavaria. With crisp and refreshing mouthfeel and a sweet malt backbone and classic noble hops, this classic beer with pair nicely with a traditional Scotch Pie. The beer is traditionally cold fermented for 4 weeks. ABV 4.8%

Try this beer with a Scotch Pie from Peter Walker Butcher‘s in Coldingham.

Autumn time signals the return of game meats on the menu. Venison, a rich-flavoured red meat, is a popular alternative to beef and is also lower in fat and calories as the meat is not marbled with fat. It is a good source of protein for those who are looking for healthier alternatives.

Hadrian’s Game Larder, based in Hexham, supplies a variety of game-filled pies, but we’ve chosen the Venison and Wholegrain mustard pie.

Pairing the pie with an ale was slightly trickier because of the power of wholegrain mustard. We decided on a bitter-style ale. Upland Ale Copper Best Bitter by Cheviot Brewery is smooth and refreshing. The notes of toffee from the Crytal Dark malt combined with the rich malty tones from Maris Otter balance the bitter to provide a satisfying bitter.

Game pie is one of the oldest forms of meat pie. It dates back to the Roman times, but it was during the Victorian times that a game-filled pie was most elaborate. Foreman’s Butcher shop in Norham make a popular selection of game pies and you can also find them at traditional pubs and micropubs.

Try a game pie with Traquair’s House Ale, 7.2% ABV. It has rich plummy, vanilla notes and is dark and distinctive, complementing gamey flavours.

A popular pie from Jarvis Pickle in Eyemouth. Curried cauliflower is a vegetarian alternative pie which recently won a Bronze Award in the British Pie Awards this year.

The pork pie is a Midlands classic. The pie is meant to be enjoyed cold and is a favourite snack at micro-pubs. This Pork Pie is from Foston’s Fine Meats which have shops in Duns, Kelso and more recently Berwick-upon-Tweed.

To cut through the saltiness of the pork, you need an ale with sweet, orangey notes.

A perfect match for this would be Dark Skies Ale, 7% ABV, from Allendale Brewery. The roasted malts give a sweet biscuity flavour with hints of cinder toffee while the Traditional Goldings hope offers Seville orange marmalade tastes and floral aroma.

The ale is named after the local rural area gaining a dark skies status.

For those avoiding, or who don’t enjoy a meat pie, a pie filled with mushrooms and lentils is a perfect, filling, Autumnal pie.

Loaf BnB, just outside of Berwick-upon-Tweed, is a Northumberland’s first vegan bed and breakfast and offers exciting vegan alternatives to locals and travellers alike. Karen, the owner, has kindly suggested some vegan pie fillings that she makes herself.

Try making a puy lentil and chestnut mushroom pie at home and match it with a vegan-friendly ale such as Wickety by Bear Claw Brewery. Wickety, 4.2% ABV, is a black beer but medium-bodied so it won’t overpower the meaty tastes and textures in the pie.

The savoury mince pie. Minced beef and onion pie. A classic dish that looks a lot more refined than its cottage pie cousin. Mince pies, that we usually eat at a certain time of year, used to be savoury, but shredded meat, suit and dried fruits eventually became sweeter. Beef is a notoriously rich meat, even more so when swimming in gravy. A mince pie is one that even fussy eaters can’t resist.

It would be hard to write an article about pies and not include the post-Sunday dinner classic Apple Pie.

This pie comes from local bakers James Ford & Sons,  who have premises in Berwick-upon-Tweed and Norham.

A bit out there, but a beer match with this would be Bear Claw Brewery‘s Black Mage. A rich, full-bodied stout. It has a nose of coffee and slight smoky bitterness mouthfeel that balances the sweet and tart notes of the apples. If you think about it, it’s like having a stout rather than a coffee with your dessert. At 8.3% ABV, just be careful!

A beer to match this pie needs to cut through the rich creaminess. It needs fresh citrus notes. A pale ale that doesn’t overpower or be overpowered by the pie.

Little White Cloud by Tempest Brewing Co. is a great match. It is a light ale, at only 2.8% ABV, and has an amplified tart, fruity and fresh on the palate and finish. The addition of fresh Scottish gooseberries only adds to the zingy, light flavours this pale ale has.

If you’d prefer something a bit stronger, try Little White Cloud’s big brother Long White Cloud, 5.6% ABV. It is a light ale with pineapple and citrus tastes with stone fruit and tropical aromas.

More Than A Filling

These days there’s a pie for everyone. Crazy flavour combinations alongside the old classics have kept the British pie at the top of our favourite food list. Next time you make or bake a pie, try one of our local beer suggestions to enjoy alongside it.

For further reading, check out our articles on brewers in Northumberland or Scottish Borders. 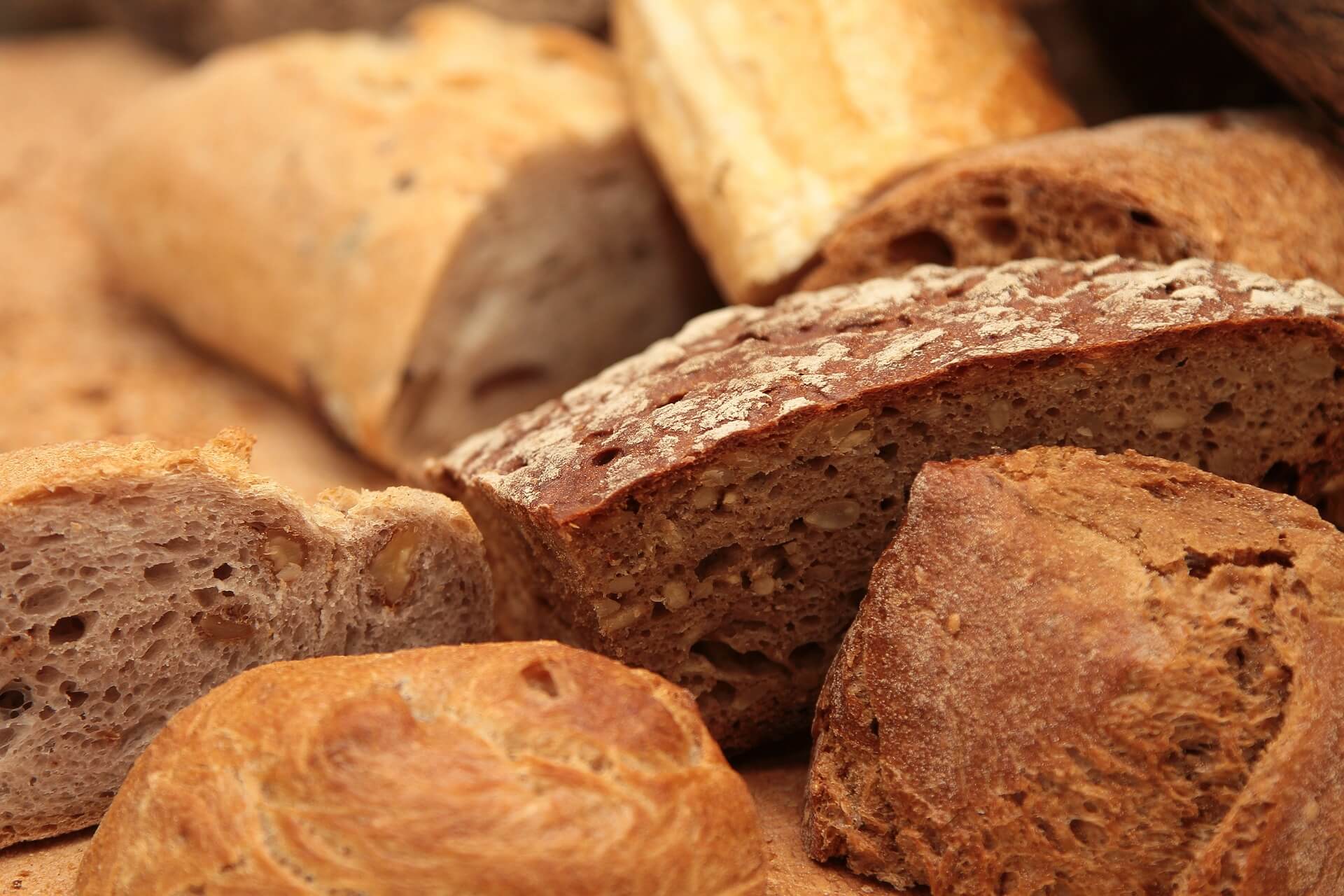 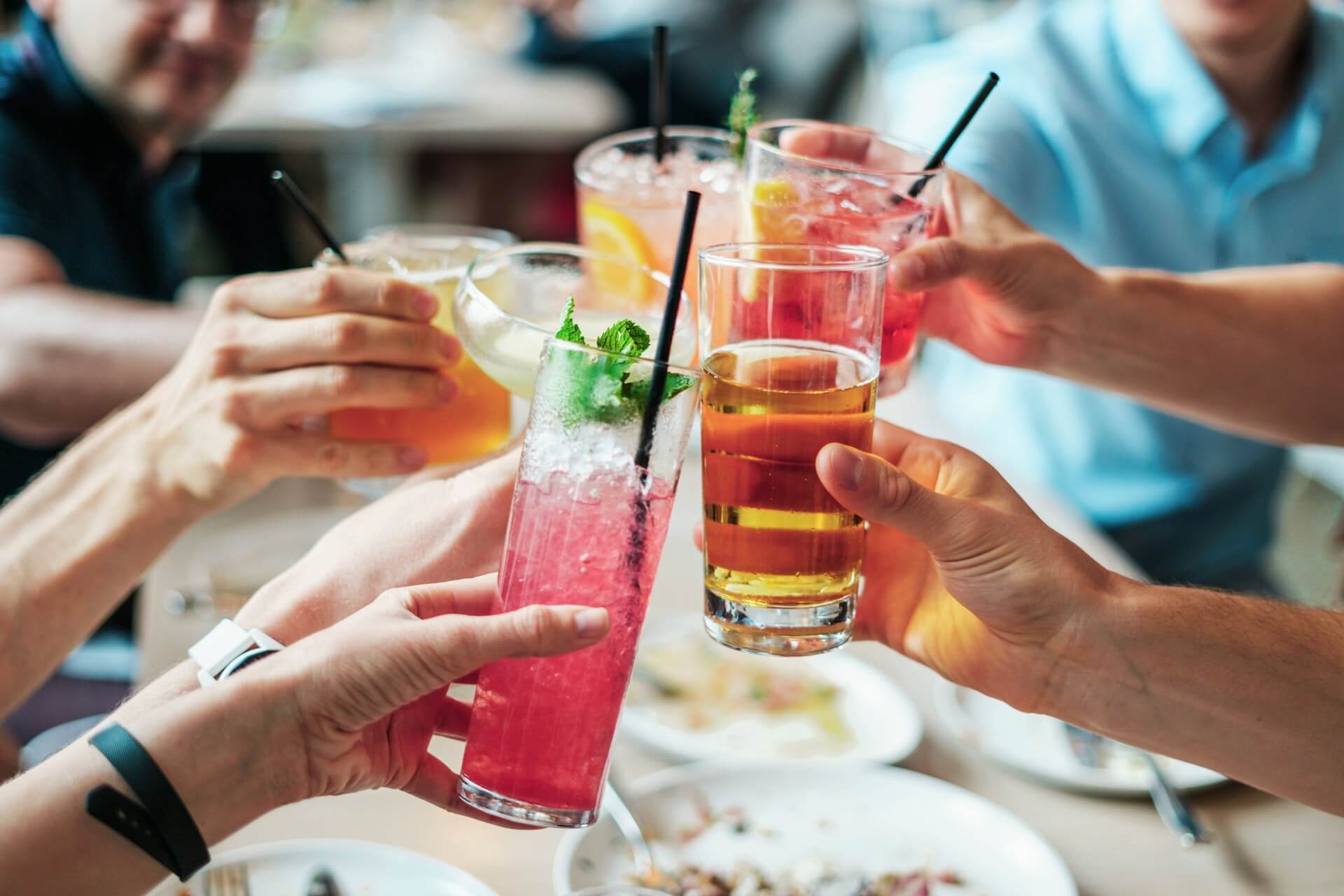 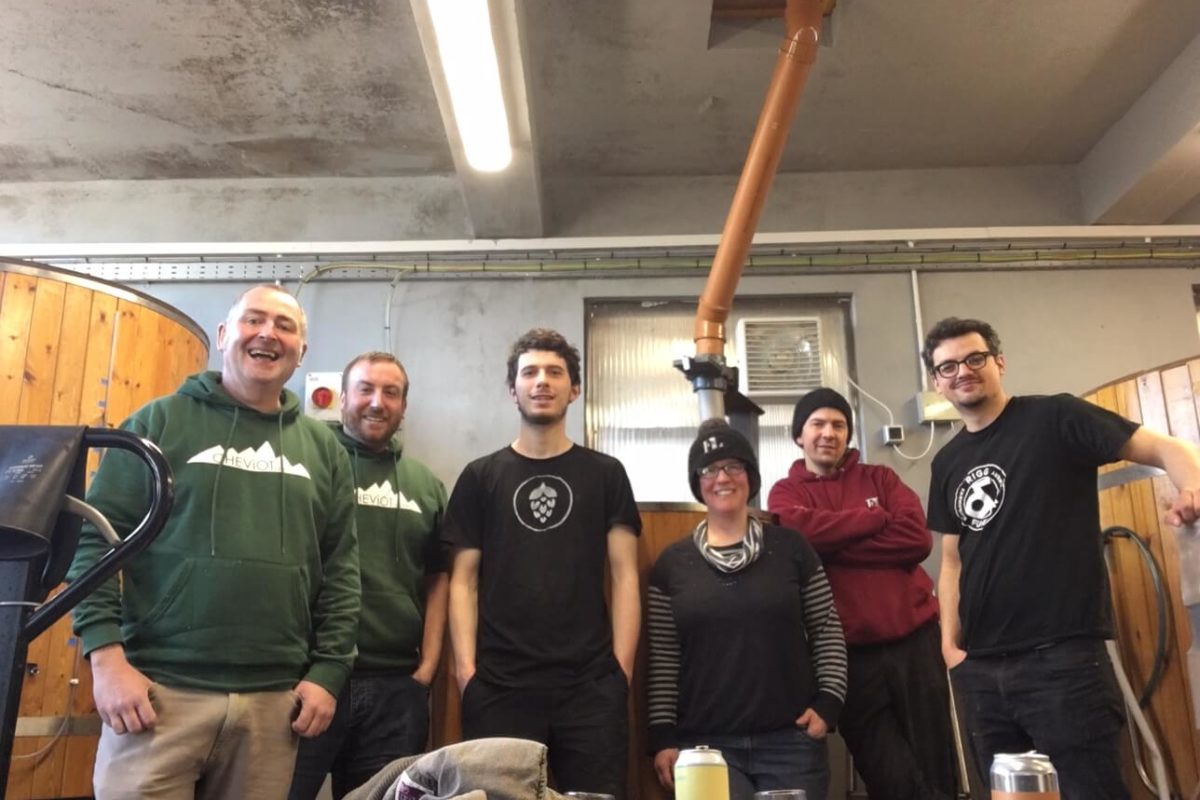 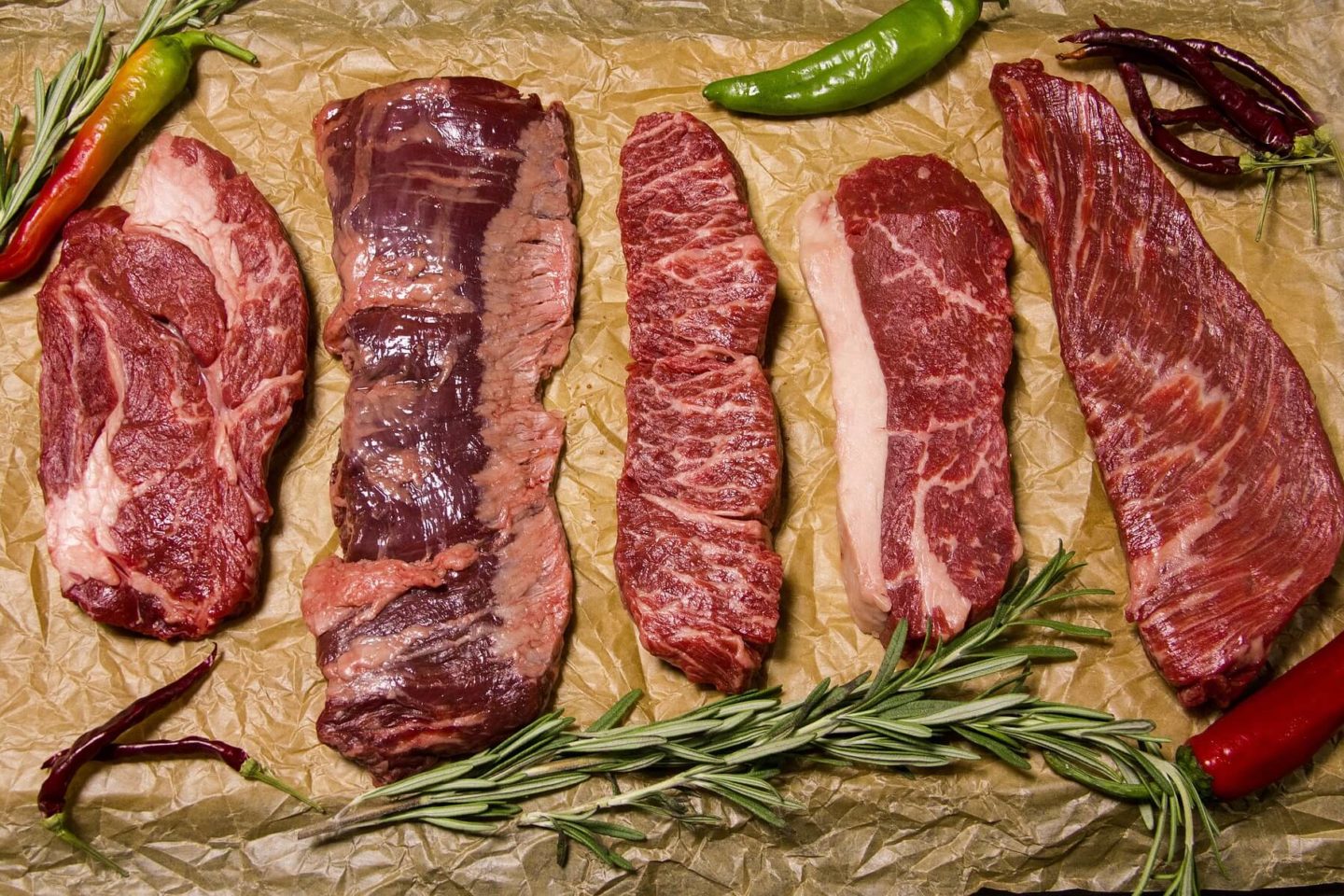