A Taste of the Seasons 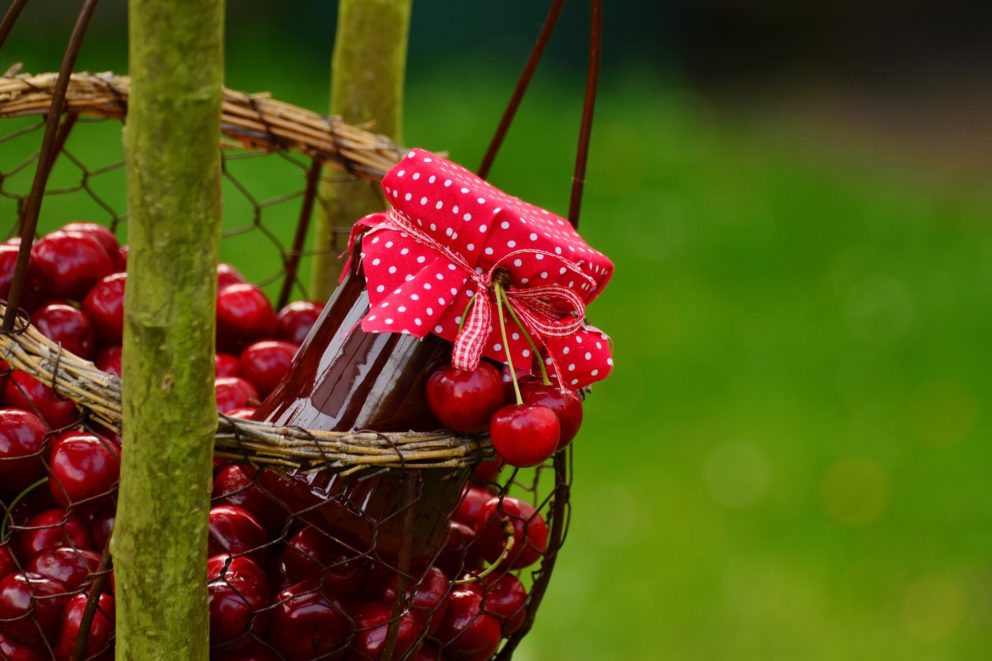 With preserves, you can really savour the flavour of each season. Oranges in winter, rhubarb in spring, berries in summer and apples in autumn. You can get creative with preserve-making. As fruits generally perish quickly, and their ‘seasons’ are short, preserving fruits became a quick and easy way to get the benefits all year round from fruity crops.

Jam, like tea and cake, is essential to typical British life, especially in country living terms. British jam is known for its firm set and bright colour as a result of the high sugar content. We don’t eat jam for its nutritional purposes, we eat it for a sweet relief. It is a food once only enjoyed by royalty until sugar became mass-produced and available to the poor. Associated with summer memories, smells and tastes, strawberry jam is still the most popular flavour in the country and is generally the default jam given when you are eating out. It is a sticky, sweet treat!

Marmalade, too, is also a quintessential British product. Famous lovers of marmalade include Winston Churchill, D.H. Lawrence and of course Paddington Bear! Even Sir Edmund Hilary took a jar of the stuff up Mount Everest and James Bond ate marmalade, spread thick on wholewheat toast as stated in From Russia with Love, Ian Fleming’s 5th instalment in the James Bond series.

Making preserves is an ancient practice. The first known, and recorded, jam recipe is in the book called The Art of Cooking by a Roman man, Apicius. In this book, Apicius suggests that in order to keep fruit, such as quince, cherries, citron (relating to citrus fruits) and apples, to be placed in a jar, covered with honey and defrutum, a grape syrup, and sealed with a lid[1]. This recipe is similar to the preserve-making process of today. Large-scale production of preserves came later, in the late 18th century when pasteurisation made such mass-production possible[2].

Preserving foods has come back into fashion, as part of the no-waste campaign movements. Sometimes, looking to the past, before mass food production, we can see how to live sustainably and seasonally. Our current economic climate has brought the old traditions, like preserve making, back into the mainstream. Convenience shopping has lost the confidence of the people. Locally made produce is also more popular and has great followings.

The Memoirs of Marmalade

Marmalade has a pretty interesting tale, with numerous conflicts of its invention. Marmalade, is a sophisticated sister of jam. You need the complex palate to appreciate the bittersweet notes, the thick peel and colour. Marmalade differs from jam, only in the sense that it is made only with citrus fruits[3].

There are several myths surrounding the invention of marmalade. Marmalade, as we know it, was said to be invented in Dundee in the late 18th century. A merchant, called James Keiller, bought a haul of damaged Seville oranges after the Spanish ship had sought refuge from a storm. It is said that his wife made the oranges into a marmalade and the first marmalade factory was founded.

In another story, Mary, Queen of Scots doctor prescribed an orange and sugar mixture as a treatment for seasickness as she travelled from France back to Scotland. The word for marmalade coming from the French ‘la mer’ for sea and ‘malade’ for illness – mer-malade. Other sources suggest marmalade name comes from the crew on the ship saying ‘Marie est malade’. Sailors and seafarers also c0nsumed marmalade to fend off scurvy because of its rich vitamin content.

It is more likely, however, for marmalade’s roots to go back over 2,000 years to Ancient Greece and Rome where quince and honey paste was used medicinally[4]. The craze spread to the Iberian Peninsula, where in Portugal the quince paste got the name marmelada from the Portuguese word for quince, marmelo. From there, the paste found popularity in France, and finally in the UK at the end of the 15th century and the word was anglicised to marmalade.

In Tudor England, marmalade was considered an aphrodisiac and prostitutes were known as marmalade madams[6].

The quince later turned to bitter orange in the 18th century and the treat became a breakfast and teatime regular, rather than a medicine. This may be due to the switchover from honey to sugar.

The last decade saw the marmalade trade suffer due to modern lifestyles and changes in taste. In 2005, the World’s Original Marmalade Awards began to inspire and preserve the marmalade-making heritage of these Isles and has been held in March every year since. This comes at a time when traditional British produce, and meals, are at the forefront of our lives again, especially if they’re locally made. Marmalade sales have risen nearly 3% as a result of a famous bear’s new film and his penchant for this spread[5].

Conserve Crafters in the County 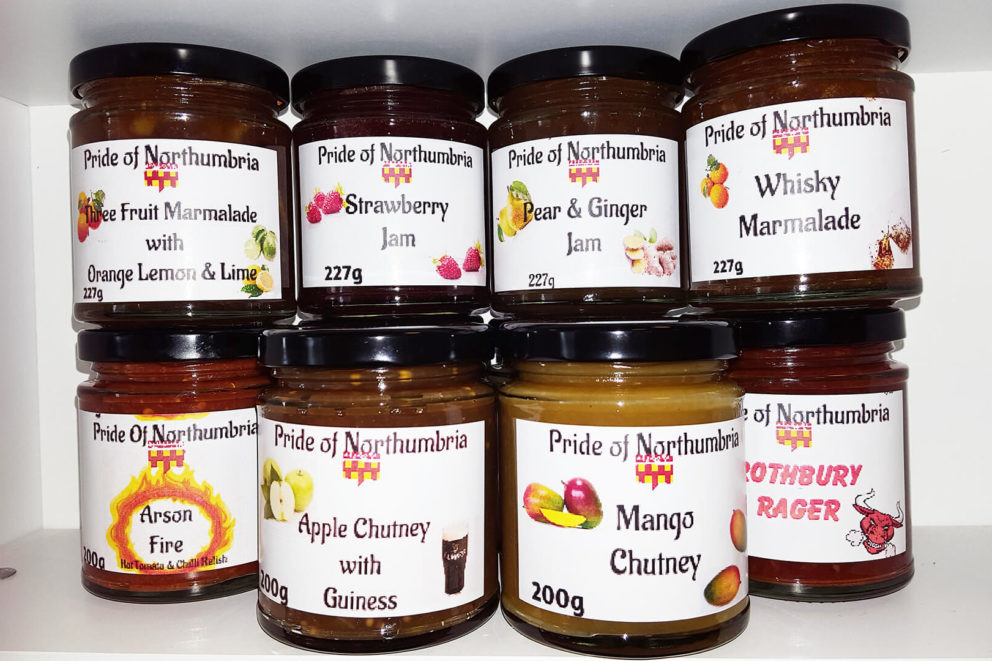 Sandy Higson, alias Mad Jam Woman, is a multi-award-winning jam, relishes and sauces maker. Creating a variety of preserves and condiments, all of her products are handmade in small batches and local fruits are sourced where possible.  Mad Jam Woman’s most popular jams include Raspberry and Prosecco and Cherry Bakewell, cherry jam also being a favourite of legendary French writer, prophet and apothecary Nostradamus[7].

Some of her products are collaborations with other local businesses products, for example, Seville Marmalade with Hepple Gin, Lemon Marmalade with Lindisfarne Pink Mead and mustard with Alnwick Rum.

Currently based in Amble, also known as the friendliest port, her products are sold around the county, and she is a regular at Farmers Markets and local food events. 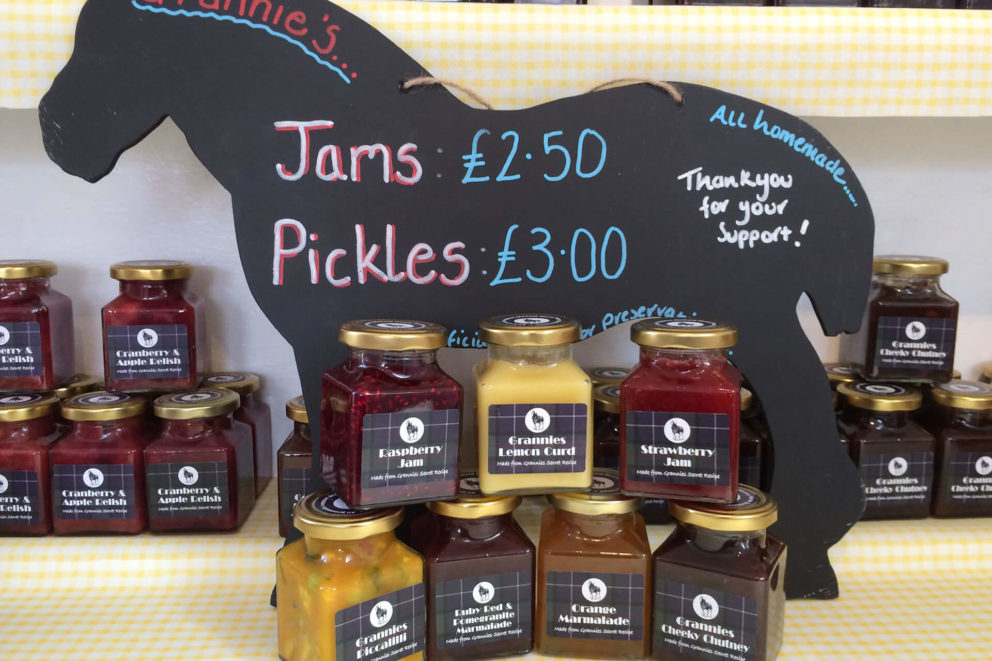 Horses and jam may seem like a crazy combination, but there is an interesting history to this. Back in the day when we did source food locally and ‘grow our own’, the workers on the fields, with their equine colleagues, would stop for ‘peace time’. The word ‘pieces’ generally a Scottish colloquial term for a sandwich, but is also used in the Anglo-border with Scotland. At ‘peace’ time you would have your ‘piece’ while the horses also rested after a busy morning. The ‘pieces’ usually included pickles or jams. Hence why Milfield Heavy Horses sell a variety of preserves. All their products are homemade, using traditional recipes. These include hams, from traditional pig breeds which they rear, cakes and jams and pickles.

With over 20 varieties of jams and pickles, there is a flavour for everyone. The jam flavours include traditional favourites such as Strawberry and Raspberry, alongside lemon curd, chutneys and marmalade.

All their products are available at the farm, located between Ford and Etal (the nearest town being Berwick-upon-Tweed). All proceeds go to the upkeep of Hay Farm and conservation of rare breed animals. The jams and pickles are all additive free, with many of the jars containing locally grown ingredients. 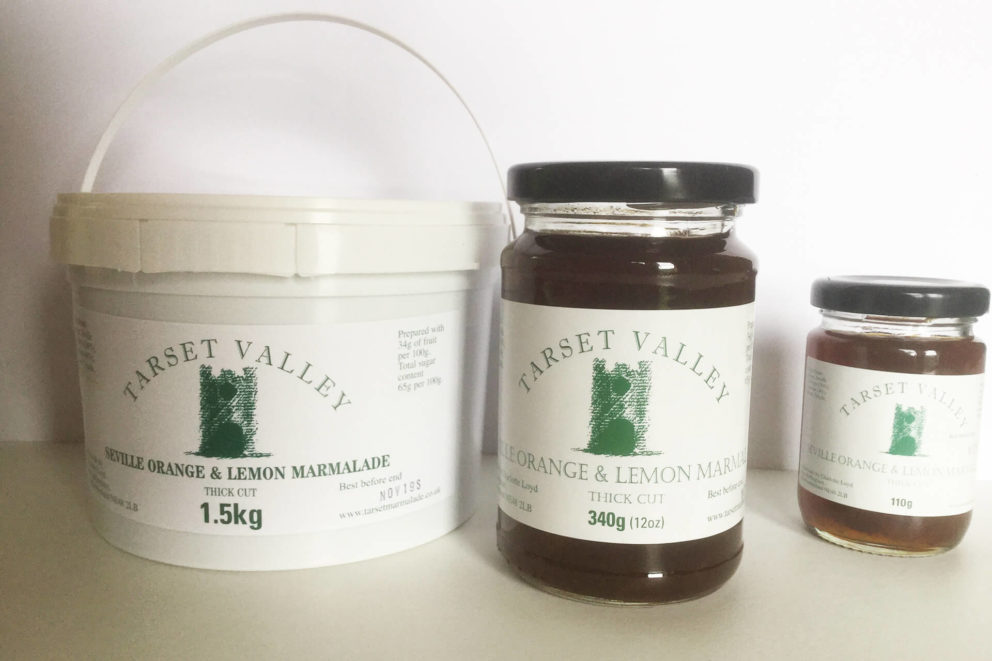 With a demand for her marmalade from local businesses and a tasty, timeless family recipe, Charlotte Lloyd started a small-batch production of Tarset Valley Marmalade in her country kitchen, over 20 years ago. Surrounded by beautiful views of the North Tyne valley, where the clear, spring water is also sourced for the marmalade.

Charlotte was asked to make the marmalade by fellow local producer Mark Robertson of the Northumberland Cheese Company, to sell alongside his cheese. Subsequently, The Northumberland Sausage Company showed interest and created their locally inspired version of red onion and marmalade sausages, which is also award-winning!

Tarset Valley marmalade has a loyal following, and possibly its most famous devotee is explorer Sir Ranulph Fiennes. The marmalade is available in many deli shops in the southern parts of Northumberland as well as local restaurants and B&Bs. The marmalade comes in 3 sizes; a mini jar 110g, a standard size 340g and a large plastic catering pail size 11/2kg.

The special taste with this product is because of its simple list of ingredients. Local, fresh spring water, Seville oranges from local greengrocer Jennings, and lemons, as they bring out the tangy flavours of the Seville oranges. Black treacle is also added which gives the marmalade its distinctive colour and caramel flavours. The marmalade is made in small-batches so taste and quality are consistent. 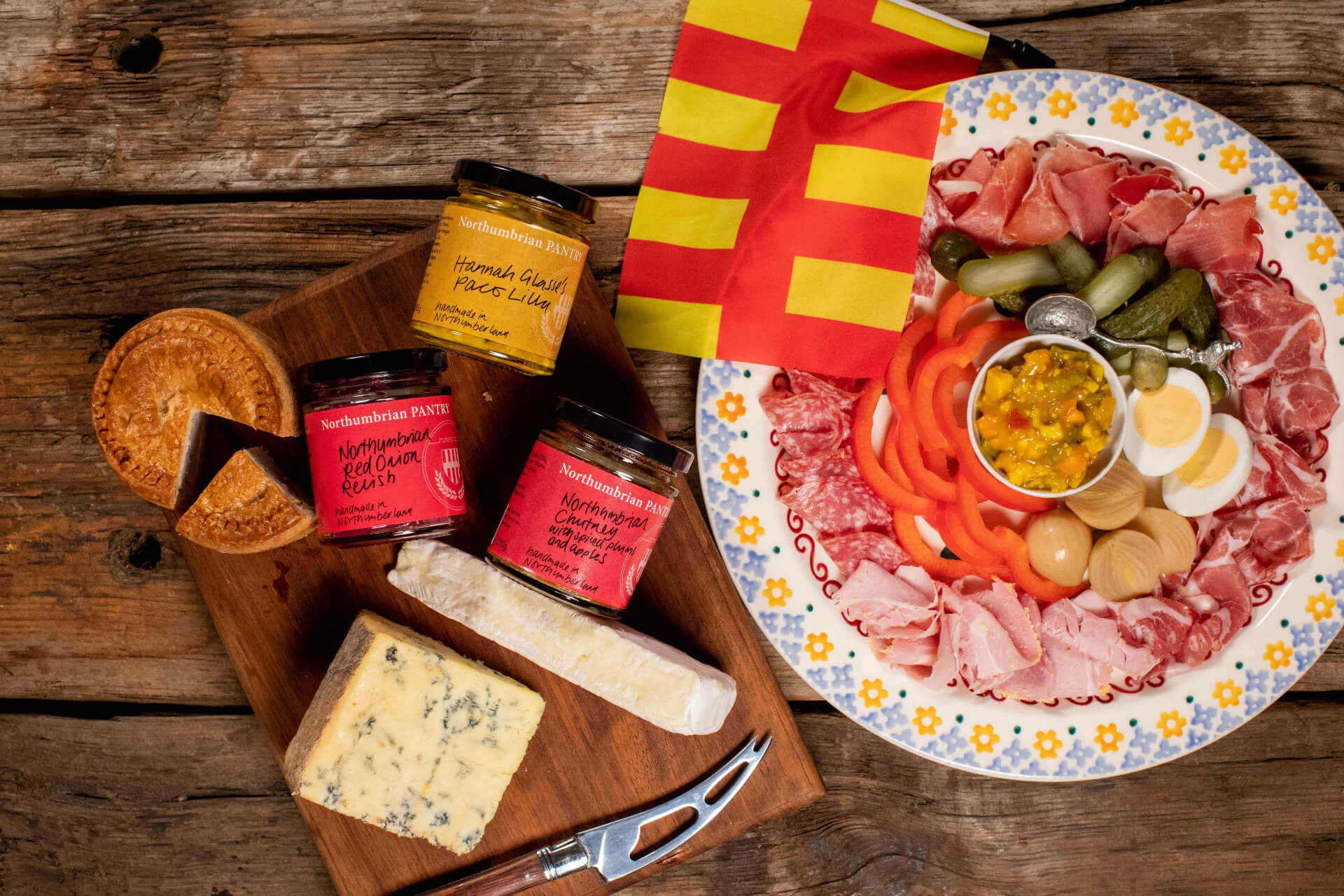